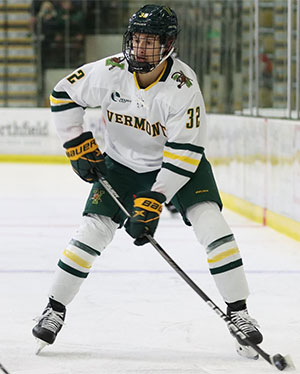 Cory Babichuk will enter training after transferring from RPI.

Vermont head coach Todd Woodcroft realizes that rebuilding the Vermont program will be a process. It’s not something the second-year head coach wants to rush.

“Speeding up progress can sometimes slow you down,” he said. “We’re under construction right now, like our rink. “

The historic Gutterson Fieldhouse is in the midst of a multi-million dollar facelift, as is the Catamount program. Woodcroft was hired last year, in the midst of a pandemic, and has been tasked with rebuilding a program that just five years ago completed a 20-game winning streak in three out of four seasons.

The program had a tough time starting in 2017, and after that four-year cycle where the Catamounts posted a 77-65-15 record and made an NCAA tournament, the next four years were followed by a 28 -72-18 save.

“We have a great team this year,” said Woodcroft. “I’m happy with that, because we can’t dress everyone. How you practice will determine if you play. We want players who will be part of an identity. We have job descriptions and we will recruit according to that identity. … Even if you are going to score 30 goals, if you do not match our identity, you might not be worthy of the UVM.

Woodcroft and his team immediately got to work recruiting players who they said ticked all the boxes. They brought in Dovar Tinling – a highly skilled prospect who was drafted by former coach Kevin Sneddon – at the age of 17 last season. In just over a year, the Catamounts have taken on a more international feel, which matches Woodcroft’s familiarity with Europe while helping the Swedish national team coach. There are now seven international players on the roster, and six are new freshmen brought in this season by the new coaching staff.

“Our focus here hasn’t changed since I took the job, and that goal is to win and develop people and players,” said Woodcroft. “With the ability to watch players from all over the world on your phone, there are no secrets. I am fortunate to have two coaches on our staff who are well connected all over the world. to the honor of Steve (Wiedler) and Scott (Moser) who are able to recruit these players. We hit a good point with the European players. We have a good relationship there that can point us towards these young players, then once we’re on the phone it’s all about getting our message across. Our message is that we will be better than we were last year and that we will be better than yesterday. These players know our expectations “There is no doubt on the agenda of our coaching staff. We want all of our players to play hockey after UVM.”

“We have Joel Maatta (from Finland), who I think is an NHL player. He could be in the mix for the world junior team for Finland. When I spoke to (Sioux City head coach) Luke (Strand) last year about Joel, he kept saying he was a Hockey East player. He’s tall, he’s strong, he’s heavy, and he’s mean. He is ready to compete.

UVM was able to take advantage of the transfer portal to meet the needs within the program as well.

“We don’t have independent contractors,” Woodcroft said. “We’re not looking for fancy players here. We are looking for players who know how difficult it is to win.

“When you build a team, it’s almost like building an NHL team. You have to recognize where you are. Where are you in the pecking order? Are you ready to compete for a Stanley Cup? Do you want to participate in the playoffs? Do you want to compete for a place in the playoffs? When you can bring in someone like Philip Lagunov, it brings experience. Joe Leahy from Cornell, Robbie Stucker from Minnesota, these are amazing programs. RPI’s Cory Babichuk, these guys are veterans. When the young players see that these guys don’t let the emotions get the better of it, it’s good for our team. Emotions can be crippling. The details of how they practice and how they prepare are so invaluable to our program. I know that problems will be solved before they even reach us, because of their presence. In order for us to be successful, I’m going to lean on these guys.

Now that fans will be back in the Vermont stands, Woodcroft is hoping his team can bring some of the noise and atmosphere back to Gutterson. Fans alone will not create the environment. Woodcroft knows his team need to give fans a reason to make some noise.

“I saw the ‘Gut rock in the late’ 80s when my brother (Craig) was playing Colgate,” he said. “I remember that. They were impressions on my brain. When I was with the Flames we had a pretty good player named Johnny Gaudreau and I got to come and watch him play here. Personally and selfishly I’m so excited. But I’m really excited for the players. But now it’s up to the players to bring people in. Winning is going to put people in the stands.

That same Colgate schedule returns to Gutterson this weekend, as both teams open their seasons in a non-conference series.